The Creation of Nuestro Centro 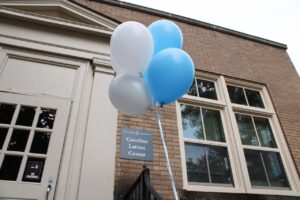 Currently residing in a hallway in Abernethy Hall, the Carolina Latinx Center (CLC) serves as a beacon of support for Carolina students from Latinx backgrounds. It provides a place to work, relax, host events, and socialize during the difficult journey students face. The CLC’s Assistant Director, Marcela Torres-Cervantes describes it as, “A space for students both undergrad and graduate, as well as professionals, UNC faculty, staff, and community members to come together. We want to be a place that offers support for whether it’s identity development, academic achievement, and innovation.”

But it was not always the center we know today, only through the hard work and dedication of its founders that it has been able to promote engagement, scholarship, cultural awareness, and public service to UNC students and faculty alike.

In 2004, UNC had a void when it came to talking about diversity, and the CLC had yet to even be thought of. The conversation was very binary, only ever relating to black and white students leaving many students not identifying with either group feeling like they did not fit in. This did not sit right with newly hired UNC recruiter for underrepresented students, Josmell Perez. Perez said, “When I arrived, the American Indian Center was just being established and started. And that also left one of the largest minority groups [Latinx] in need of a space that they can call their own and so my office became that central space. It wouldn’t be uncommon to have Latinx students you know, just parading into my office.”

Inspired by the American Indian Center, Perez took the first steps to develop UNC’s very own Latinx Center. It would take some time though as it was not until 2009 that the Carolina Latinx Collaborative would be founded, a program under the Office of Diversity and Multicultural Affairs with the idea of incubating it into a full fledge center one day. Led by Perez, the Collaborative had offices and classroom access at Craige North Residence Hall where Latinx students and faculty could host original programming and address issues facing the community on campus. It was not much at the time but having somewhere to start gave hope to Perez. Perez said, “It was our little piece of Carolina that we were going to hang on for dear life and make the best out of it.”

It was not long after its inception that the Collaborative started racking up its list of achievements. The first Latinx Alumni Reunion to celebrate the growing identity of Latinx on campus was created, a UNC Latinx student peer mentoring program began, in 2010 the first official Latinx Heritage Month was celebrated, and many more. The achievements that the Collaborative accomplished in such a short time with limited number of resources as well as the ever-increasing amount of Latinx students, showed that the Collaborative needed to grow. It needed its own structure to properly support Latinx students. It took ten long years after the conception of the Collaborative but in 2019 the Carolina Latinx Center was born. Perez said, “Our center’s humble beginnings is a true testament of what our community represents, that we don’t give up, we don’t we don’t take no for an answer. With every step we celebrate our accomplishments, but always striving for more.”

The official formation of the Carolina Latinx Center after the Collaborative has given it the opportunity and resources to support many more Latinx students across campus throughout their college experience, something that was simply unheard of just a decade prior. Uriel Jimenez, a transfer student at UNC said, “For me, I guess just talking to someone like myself. Having a place to talk about stuff that’s going on in my life and being a transfer student here. The support they provide is very helpful.”

The Carolina Latinx Center has already achieved so much in its short time as an officially recognized center, and it still has so much to offer. Perez, just like in the inception of the Collaborative, wants to provide the support he believes his community deserves. Perez said, “We are very happy to be recognized as a center. We are happy with our space. But we’re thinking about what’s the next level, right? We want a bigger space, we want to be able to offer more programming, we want to be able to diversify some other things. And to me that sense of community, that sense of history, that sense of still striving for more, I think it represents a lot of our own heritage and the people in our communities. I hope that the center can continue to inspire and motivate other young people.”