Announcing the Formation of the Carolina Latinx Faculty Council

The executive board meets twice a semester (2nd Friday of September and November & January and April). The Council is open to all faculty members of all ranks at Carolina. The first social event will be on Friday, April 8th from 2-3:30 pm at the Campus Y Anne Queen Lounge where the Council will be given its charge. 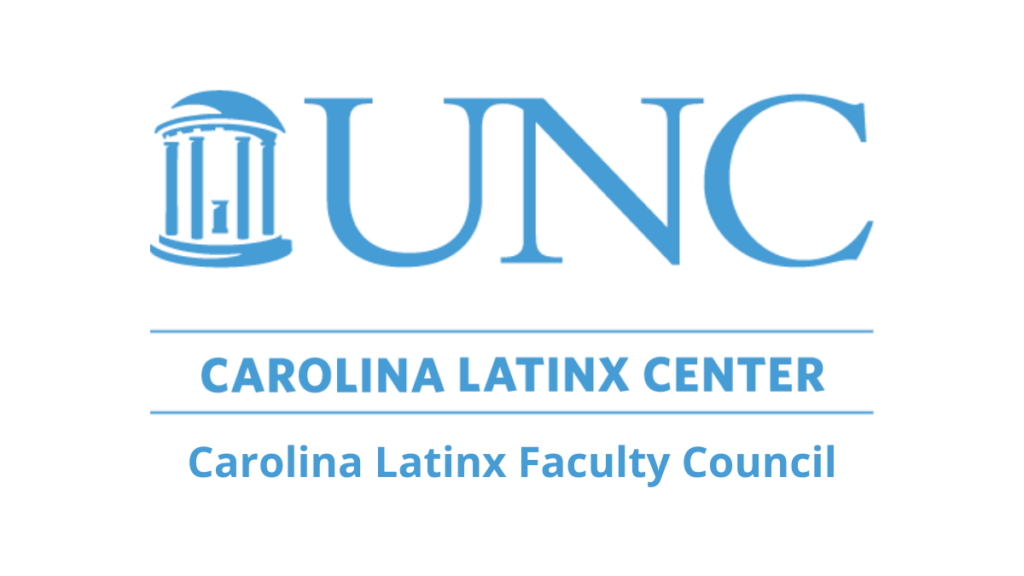 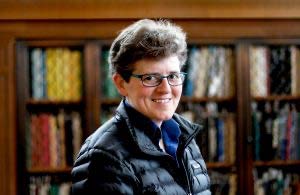 Board Chair: María DeGuzmán
Eugene H. Falk Distinguished Professor of English & Comparative Literature and Founding Director of the UNC Latina/o Studies Program. My specializations are Latina/o Studies and U.S. literary and cultural studies. As Founding Director of the UNC Latina/o Studies Program, I have published three scholarly books, Spain’s Long Shadow: The Black Legend, Off-Whiteness, and Anglo-American Empire (University of Minnesota Press, 2005); Buenas Noches, American Culture: Latina/o Aesthetics of Night (Indiana University Press, 2012); and Understanding John Rechy (University of South Carolina Press, Sept. 2019). I have published many articles on Latina/o cultural production and I write and teach about relationships between literature and various kinds of photographic practice. I am also a conceptual photographer and a music composer/sound designer. My photography has been exhibited nationally (including at the ICA in Boston, MA) and internationally (including at the Watershed Media Centre in Bristol, England). I have published a creative nonfiction essay in Callaloo; photography in The Grief Diaries, Coffin Bell, Typehouse Literary Magazine, Map Literary, Two Hawks Quarterly, Harbor Review, The Halcyone, Gulf Stream Literary Magazine, Ponder Review, Alluvian, streetcake: a magazine of experimental writing, Galdrar of Tempered Runes Press, and The Closed Eye Open; creative nonfiction photo-text pieces in Oyster River Pages and La Piccioletta Barca; photo-text flash fiction in Bombay Gin, Pensive: A Global Journal of Spirituality and the Arts, and SolLit: A Magazine of Diverse Voices; poetry in The Kentucky Poetry Review, The Cape Rock, Empty Mirror, and Landlocked Magazine; and short stories in Mandorla: New Writing from the Americas, Huizache: The Magazine of Latino Literature, Sinister Wisdom, and Obelus Journal. To learn more: https://englishcomplit.unc.edu/faculty-directory/maria-deguzman/ 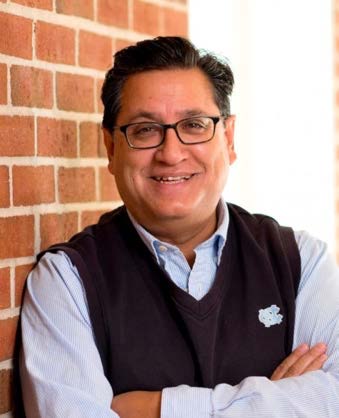 Associate Professor, Hussman School of Journalism and Media
An award-winning investigative reporter and author whose work has appeared in The New York Times, Time magazine, The Huffington Post, Salon.com, The Chicago Reporter, and other national and local publications. He is the recipient of the Alfred I. DuPont Award from Columbia University for his team reporting on North Carolina Poverty for WUNC.FM. The DuPont Award is considered the Pulitzer Prize of radio. He joined the school in 2007. For the past 20 years, Cuadros has focused his reporting on issues of race and poverty in America. In 1999, he won a fellowship with the Alicia Patterson Foundation, sponsored by New York Newsday and considered one of the most prestigious fellowships in journalism, to report on emerging Latino communities in rural poultry-processing towns in the South. The culmination of his reporting was his book, “A Home on the Field: How One Championship Team Inspires Hope for the Revival of Small Town America,” which tells the story of Siler City, N.C., as it copes and struggles with Latino immigration through the lives of a predominantly Latino high school soccer team. In 2014, he helped to produce and star in Los Jets, Playing for the American Dream, a television documentary series produced by Jennifer Lopez, which has appeared on several television cable channels and streaming services. He is one of the founding members of the Carolina Latinx Center. To read more: http://hussman.unc.edu/directory/faculty/paul-cuadros 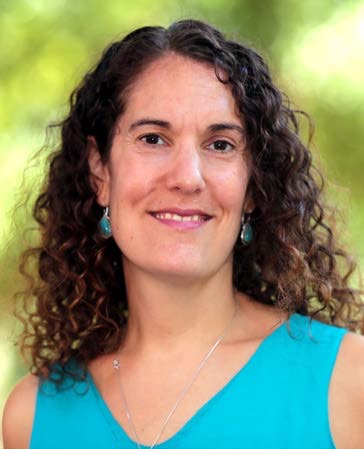 Ariana E. Vigil
Professor, Department Chair, Women’s & Gender Studies
My teaching and research focus on U.S. Latinx literature and culture. In particular, I examine how gender, race, sexuality, and class are deployed in various national and transnational contexts. My first book, War Echoes: Gender and Militarization in U.S. Latina/o Cultural Production, Rutgers University Press, 2014, analyzes how U.S. Latinx authors and activists responded to U.S. military intervention in Central America and the Middle East. The book enacts a transnational feminist praxis in its incorporation of the voices of subjects located within and without the U.S. nation-state and in its attention to the work of both authors and activists. To learn more: https://womensstudies.unc.edu/person/vigil-ariana/ 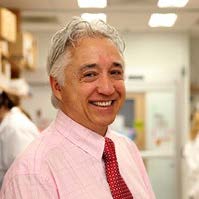 J. Victor Garcia-Martinez
Professor, Oliver Smithies Investigator, School of Medicine
Dr. Garcia uses humanized mouse models, including recently developed humanized-lung mice, to study the pathogenesis of human-specific viruses and therapeutic interventions. Dr. Garcia is using these models to study an array of human respiratory pathogens including RSV, CMV, influenza, MERS, SARS, SARS-CoV-2, and tuberculosis. He has trained over 13 Ph.D., students 40 postdoctoral fellows (past and present). His trainees hold positions in industry, government, and academic institutions. Dr. Garcia is a Fellow of the American Academy of Microbiology and his contributions to Inclusion and Diversity has been recognized by the American Academy of Microbiology and the American Society for Cell Biology. Dr. Garcia is also the Director of the International Center for the Advancement of Translational Science.

Throughout evolution, humans have been challenged by viral pathogens new to the species. The immune system mounts an adequate response that protects us from the fatal consequences of infection. However, in some instances, viruses can circumvent the immune system and cause fatal diseases such as cancer (EBV, KSHV, HCV), hemorrhagic fever (Ebola virus), AIDS (HIV), and pandemics (Influenza, SARS, MERS, SARS-CoV-2). Understanding the host-pathogen relationship at a cellular level provides rational approaches to therapy and vaccine development. It also provides a better understanding of human biology and immunology. Dr. Garcia is interested in how human viruses cause human cancer, how HIV causes AIDS and why the immune system is not able to control viral infections, and how coronaviruses cause disease in humans. His working hypothesis is that specific viral genes are the key determinants of viral pathogenesis and are responsible for disease progression. To evaluate the role of these genes in disease progression, he has developed in vivo models that recapitulate specific aspects of viral infection. His emphasis has been placed on precision animal models where human-specific pathogens can be studied and where novel therapeutic interventions can be evaluated. To learn more: https://www.med.unc.edu/cgibd/garcia-victor/ 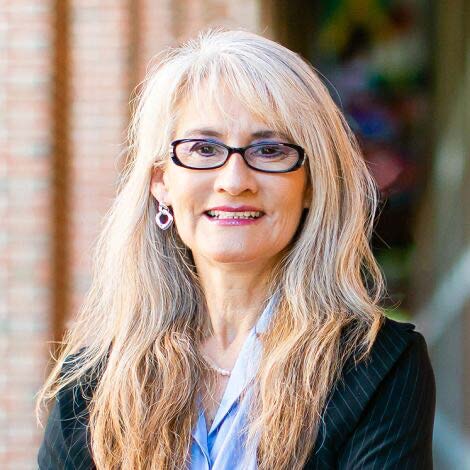 Dr. Chirino-Klevans is an executive coach and has consulted extensively with global organizations on topics related to Global Leadership and Diversity and Inclusion. She is a professor of Global Leadership at the Kenan-Flagler Business School. She is a consultant for S&P 500 global companies and the principal investigator of award-winning Virtual Reality simulations to develop leadership skills across cultures. She is a consultant for NASCAR and is the author of several books on Cross-Cultural Leadership. In her commitment towards equitable work environments, she leads the Diversity, Equity, and Inclusion courses for the MBA@UNC. Her latest book is called Cases on Global Leadership in the Contemporary Economy. Dr. Chirino-Klevans has served in many leadership positions such as Assistant Dean of Executive Education at the Fuqua School of Business at Duke University and founding member of Duke Corporate Education (DukeCE), ranked #1 in the world in Executive Education. Earlier in her career, she was served as a psychologist for the diving, rowing, and gymnastics Olympic teams.

A former world-class gymnast, and former member of the Mexican national gymnastics team she is a Pan American Games medalist in gymnastics as well as All-American in gymnastics as a student-athlete. She uses her expertise in Sports Psychology and business coaching to empower clients through the use of growth mindset approaches as well as cognitive-behavioral interventions. A recipient of several teaching awards, Dr. Chirino-Klevans holds a doctorate in Psychology, an MBA, and a Masters of Science in Psychology. She has consulted extensively with organizations in South East Asia, Latin America, North America, and Europe. To learn more: https://www.kenan-flagler.unc.edu/faculty/directory/ivonne-chirinoklevans/ 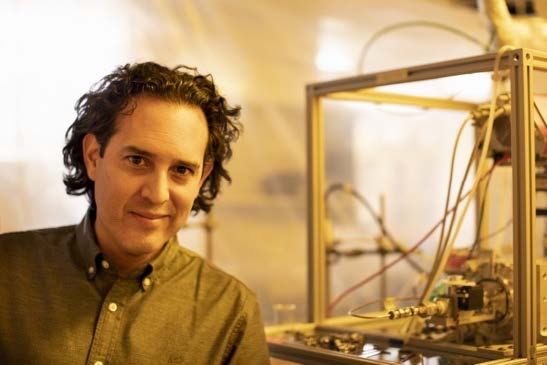 Professor Department of Environmental Sciences and Engineering, Gillings School of Global Public Health
I am a Professor in the Department of Environmental Sciences and Engineering (ESE) at the University of North Carolina at Chapel Hill (UNC). The ESE Department resides within the Gillings School of Global Public Health and is primarily oriented toward graduate education. Its research scope spans water, air, and the sublayer environments and is focused on their interactions from an engineering and science perspective. There is an emphasis on associated health and policy implications, which makes the department’s scope broader and more diverse than many of its peers. Within the department, I work within the two interdisciplinary programs of “Air Quality and Atmospheric Processes” and “Human Exposure and Health Effects.” My research is primarily conducted within interdisciplinary teams where this diversity of expertise, coupled with my engineering background, has allowed me to develop novel engineering solutions for public health problems. Learn more: https://vizuete.web.unc.edu/ 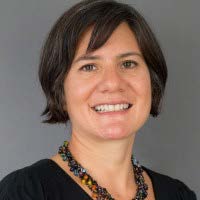 Gabriela Valdiva
Professor & Assistant Dean Honors Carolina, Geography Department
I am a Professor in the department of Geography interested in the politics and ecology of resources in Latin America. For over 20 years, I have studied the politics and ecology of oil production in the Ecuadorian Amazon. I very much enjoy bringing research together with teaching, and to that end, I encourage students to think critically about everything they read, write, and experience. I teach courses on Environmental Justice, Latin American Societies and Environments, and Political Ecology. I am also assistant dean for Honors Carolina. In that role, I focus on supporting learning opportunities and experiences that connect the classroom with real-world issues and deepen students’ understanding of themselves as agents of change. For more on my research and scholarship, visit my website: https://valdivia.web.unc.edu 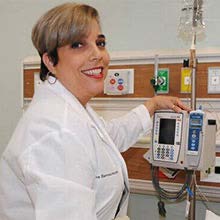 Clinical Assistant Professor, School of Nursing
I am a first-generation Latina college graduate, originally from Miami, Florida. I am a nurse, an educator, mother, daughter, and cat lady. I graduated nursing school in 1990 and obtained my Ph.D., in 2016. Nursing is my calling. When I am in scrubs, I am most at home in a pediatric intensive care unit (PICU). Teaching is my passion. I love being an educator and mentor. I love teaching at the nursing school and helping students navigate the challenges they face in the classroom and during their clinical rotations. My office has an unlimited supply of candy, aromatherapy, coloring books, and crayons (all great stress relievers)! I believe part of my purpose is to pass the Nightingale lamp to future generations and inspire them (YOU!) to change the world. I am new to Chapel Hill and North Carolina and spend my free time discovering all NC has to offer! To learn more visit: https://nursing.unc.edu/people/susana-barroso-suarez 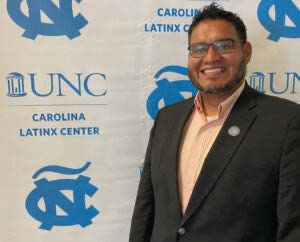 Josmell Pérez
Director, The Carolina Latinx Center
Mr. Pérez was born in Lima, Perú and moved at the age of 5 with his family to Northern New Jersey. He graduated from Muhlenberg College with a degree in Psychology and Spanish and earned his graduate degree from the University of North Carolina at Chapel Hill’s School of Education. He was involved in the formation of the Carolina Latina/o Collaborative and now serves as the Center’s director.

Prior to coming to Carolina in 2007 he worked as Assistant Director of Admissions and Multicultural Recruitment Director for Moravian College, where he led an initiative that resulted in the doubling of multicultural student enrollment. He also served as an Admissions Counselor at Ohio University in Athens, where his territory was the northwest part of the state. https://clc.unc.edu/staff/

The Formation of the Carolina Latinx Faculty Council